Lawrence Krauss and Frank Close on Nothing

American physicist Lawrence Krauss explains how the universe may have popped out of nothing, with an introduction by Richard Dawkins:

His fascinating new book A Universe from Nothing is out now. Here’s the link to my review of it published in the Financial Times

Here’s a short clip of Oxford physicist Frank Close talking about his book The Void :

And here’s a link to my review of Close’s latest book, The Infinity Puzzle, published in the Literary Review.

I reviewed Merchants of Doubt for The Independent last year. I’ve reprinted the review below to accompany this interview of one of the book’s co-authors, the science historian Naomi Oreskes who has a long-standing interest in understanding the establishment of scientific consensus and the role and character of scientific dissent, by MIT academic, science writer and documentary filmmaker Tom Levenson on blogtalkradio.

Here’s my short review, published in The Independent on 18 October 2010, of Merchants of Doubt: How a Handful of Scientists Obscured the Truth on Issues from Tobacco Smoke to Global Warming by Naomi Oreskes and Erik M Conway

Public scepticism about climate change is on the rise. The shift is due in part to the publication of the hacked emails of the University of East Anglia’s “climategate” scientists. Now climatologists have to live with the fact that most people simply don’t trust them. Merchants of Doubt, by two historians of science, may help restore some trust by showing that science is rarely black and white, and how its shades of grey have sometimes been distorted by a few willing hands.

Writing before “climategate”, Naomi Oreskes and Erik Conway believe that “We all need a better understanding of what science really is…and how to separate it from the garbage.” They tell the story of how for half a century, a small group of scientists in America collaborated with think-tanks and corporations in campaigns to discredit scientific research by creating doubt and manipulating debate.

Manufacturing doubt as an effective corporate strategy was first developed by the American tobacco industry. Determined to stop any government regulation in the face of scientific evidence linking tobacco to lung cancer, the cigarette-makers created the Council for Tobacco Research to discredit the scientists and dispute their findings. “Doubt is our product,” boasted a now infamous 1969 industry memo. Doubt would shield the tobacco industry from litigation and regulation for decades to come.

The so-called “Tobacco Strategy” was used to “maintain the controversy” by promoting claims contrary to research. The peddlers of doubt insisted that scientists were wrong about the risks of Ronald Reagan’s Strategic Defence Initiative, and that acid rain was caused by volcanoes. They would dismiss global warming by claiming, in turn, that there was none; if there was, it was just natural variation; finally, it didn’t matter because humans would adapt. Aided by a complicit media, these claims generated the illusion of genuine scientific debate when there was none at all.

No scientific conclusion can ever be proven with certainty, but it is no more a “belief” to say that the Earth is heating up than to say that continents move or that germs cause disease. Oreskes and Conway warn that, “without some degree of trust in our designated experts we are paralyzed”.

If you’re interested in finding out more about the accelerating universe and the work of the 2011 Nobel Prize winners Saul Perlmutter, Brian Schmidt and Adam Reiss then have a look at The 4% Universe: Dark matter, dark energy and the race to discover the rest of reality by Richard Panek.

Here’s my review of the book published in The Times on 12 February 2011:

For Galileo seeing was believing. When in 1609 he learnt of the Dutch invention of the telescope, he quickly constructed his own. With no reason to think there was anything to find, he searched the night sky and found that there was far more to the universe than meets the naked eye. He saw that the Moon had mountains, the Sun had spots and he observed the phases of Venus. With the discovery of Jupiter’s moons, Galileo found hard evidence that not all heavenly bodies revolved around the Earth. In March 1610 he published, The Starry Messenger, his report of what he had seen. All 500 copies were sold within a week.

Four centuries later Galileo’s successors know that they cannot see, even using their dazzlingly variety of modern telescopes, an astonishing 96 percent of the universe. The tiny fraction that is visible to their fine-tuned instruments is the stuff that we and all the countless planets, stars and galaxies are made from. Get rid of us and of everything else we’ve ever thought of as the universe, and very little would change. ‘We’re just a bit of pollution,’ one cosmologist says. We maybe irrelevant, but the rest of reality has been dubbed ‘dark’ and for the American science writer Richard Panek it ‘could go down in history as the ultimate semantic surrender’. For this is not ‘dark’ as in distant or invisible, but ‘dark’ as in unknown – for now at least.

Yet what is known is that almost a quarter of what can’t be seen is something called dark matter. Although its very nature is a mystery, its presence is discernible through its gravitational effect on the movement of galaxies. Without dark matter the astronomical data doesn’t make sense.

From a derelict iron mine in Minnesota to mountaintop observatories, at a pace that would shame many a thriller writer, Panek tells the story of the quest to unlock the secrets of dark matter and the particles that make it up. These weakly interacting massive particles, or WIMPs, have proven so elusive that the possibility that two were detected in November 2009 caused great excitement.

Dark matter is less than half the tale Panek wants to tell. For three quarters of the unknown universe consists of an even stranger substance called dark energy. Its existence was inferred, once again, from the circumstantial evidence gathered by astronomers measuring what could be seen. They didn’t need Sherlock Holmes to remind them that after eliminating the impossible, whatever remains, no matter how improbable, is the truth.

In the late 1990s two rival teams set out to collect data on distant supernovae in an attempt to determine the rate at which the universe was expanding. It was assumed that the pull of gravity would act as a break on the pace of expansion. To their disbelief they found that space-time was being pushed apart faster than ever before. Something was overwhelming the force of gravity to drive the expansion. Dark energy was winning the cosmic tug-of-war.

With a future Nobel prize at stake, disputes and arguments over who did what and when were inevitable. Parek provides a behind-the-scenes glimpse of science in the raw as alliances are forged and friendships strained. There is a new universe to explore and the latest experiments reveal it is 13.75 billion years old and made up of 72.8 per cent dark energy, 22.7 per cent dark matter and 4.5 per cent ordinary matter. These numbers are ‘an exquisitely precise accounting of the depths of our ignorance,’ says Panek. ‘It’s 1610 all over again.’

In 1998 Sir Ken Robinson chaired a commission on creativity, education and the economy for the UK Government. All Our Futures: Creativity, Culture and Education(The Robinson Report) was published to wide acclaim in 1999. For twelve years, he was professor of education at the University of Warwick in the UK and in 2003, he received a knighthood for his services to the arts. He speaks to audiences throughout the world on the creative challenges facing business and education in the new global economies.In this lecture, given a couple of years ago at the RSA in London, creativity and education expert Sir Ken Robinson tackles the question: how do we make change happen in education and how do we make it last?

Sir Roger Penrose gave this lecture in December 2009 at Coventry University in which he describes a proposal which posits a succession of universe aeons prior to our own. The expansion of the universe never reverses in this scheme, but claims Penrose the space-time geometry is made consistent through a novel geometrical conception.

Marcus Chown on 10 Bonkers Things about the Universe

A talk by Marcus Chown, the man who gave us the award winning solar system app for the iPad, on his 10 bonkers things about the universe.

Richard Feynman – Take The World From Another Point of View

Here’s another classic Feynman interview. From the early 70s when Feynman was in his mid-50s, Take The World From Another Point of View was filmed some years before his celebrated Horizon interview that I posted here a few weeks ago:

Here’s what TIME magazine said about Ed Witten back in 2004 when he was chosen as one of its 100 most influential people:

Albert Einstein labored unsuccessfully for decades to create a theory that would merge relativity and quantum physics into one tidy mathematical package. But where Einstein failed, physicists may finally be on the verge of success, largely thanks to Edward Witten, generally considered the greatest theoretical physicist in the world. “Ed is unique,” says John Schwarz, a theorist at Caltech, “the kind of person who comes along once a century.”

The tall, thin, soft-spoken Witten, 52, didn’t even set out to be a scientist. He majored in history at Brandeis and originally planned to be a journalist but ended up getting a Ph.D. in physics instead. By the mid-1980s, some of his colleagues had decided that the answer to Einstein’s failed dream was to treat the building blocks of matter–quarks, photons, electrons and such–as minuscule, vibrating strings of energy rather than as particles. But superstring theory was considered no more than an esoteric and eccentric subspecialty until Witten (by this time a full professor at Princeton) turned his attention to it. Before long he was the dominant player in the field, and string theory was the hottest area of physics. Many of the big developments in string physics–the kind of ideas that break through theoretical logjams and bring everyone to a deeper level of understanding–can be traced to Witten. “Most other people have made one or two such contributions,” says Juan Maldacena, who, like Witten, is at Einstein’s old stomping ground, the Institute for Advanced Study in Princeton. “Ed has made 10 or 15.”

What sort of contributions? Don’t ask, unless twistor-space methods and Yang-Mills theories are your cup of tea. But if Witten’s string theory is right, it means that the quest Einstein began to find the ultimate laws of the universe may nearly be over. The proof, however, may still be many years off. Witten once called string theory “a bit of 21st century physics that somehow dropped into the 20th century.” If so, Witten clearly has the 21st century mind to handle it.

Steven Weinberg on the LHC, the Higgs boson, dark matter and supersymmetry

Physicists hope that CERN’s Large Hadron Collider, the world’s most powerful particle accelerator, will help answer some of the most intriguing and pressing questions in physics. Steven Weinberg shared the 1979 the Nobel Prize for physics with Sheldon Glashow and Abdus Salam ‘for their contributions to the theory of the unified weak and electromagnetic interaction between elementary particles, including inter alla the prediction of the weak neutral current’.

In this lecture Weinberg discusses the standard model of particle physics – to which he made major contributions – the Higgs boson, the nature of dark matter and the theory of supersymmetry.

A BBC documentary about the lives and work of Georg Cantor, Ludwig Boltzmann, Kurt Godel and Alan Turing.One went insane, another starved himself to death and two committed suicide. Find out why. 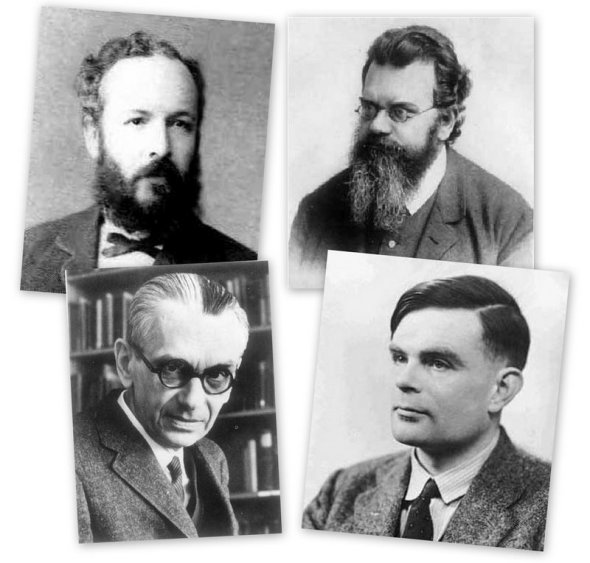